On pictures and in the movies like the Buena Vista Social Club one can admire the Cuban cars. These “yank tanks” are painstakingly maintained using household items, Russian technology and Cuban ingenuity. Since the 1962 embargo the Cuban mechanics cannot get spare parts from the US. An estimated 60.000 of these cars are still running in Cuba. 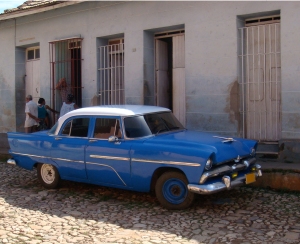 In need of computing power one of our IT customers  found an end of life supercomputer. He could pick it up for free as long as he supplied a truck. This was followed by the painstaking process of starting it up and adopting contemporary software to run on the old hardware. The team proudly hung a board above the supercomputer describing its type. Then the line broke and the board fell bending the cooling fan grill on top making supercomputer non-operational.

Do you have Cuban Cars in your IT organization? They will be slow, expensive, unsupported and proprietary. Parts will only be available from eBay. These technologies are climbing the Eastern slopes of their Weibull distribution.

If you can’t find a technical resource to hire, that maybe because the world moved forward and the experts of Cuban Cars became scarce.

Cuban Cars come with ingenious Cuban mechanics. If your organization embraces heroism and MacGyverism, you have Cuban Cars being kept operational with bubble gum and duct tape.

The unintended consequence is that your IT customers have a split perception of IT. They love and adore the IT heroes who help them, but they are deeply dissatisfied with IT as an organization, because of the failures and inconveniences they have to live with on a daily basis.

Are all Cuban Cars undesirable? Probably not. They are still suitable for small point solutions. As long as they are put into the right category of your IT strategy triumvirate of Grow/Contain/Decommission. But when your organization consists of 50% Cuban Car mechanics, you are in big trouble.

On Monday check your bookshelf and peak into your colleagues’ cubicles as well. If you see manuals of COBOL, Visual FoxPro, dBase, FORTRAN… – those are the service manuals for some of your Cuban Cars. They will be slow, noisy, smelly and expensive. They will have no safety belts or spare parts and you will find some people who adore them. These Methuselahs probably belong to the Computer History Museum.